It depends on what you are wanting to achieve.  Here are the factors

At the end of the day if the pickers have not completed the order, can the picking details be saved until the next day. At the moment they log out of ASPluris each night which I think is clearing out their pick quantities. If they stay logged into ASPluris but just logout as a user will the pick quantities remain until the following day when they finish picking the order?

While an order is being picked, the pick is stored in the physical scanner that is being used.  Provided that they use the same scanner, they can continue scanning the next day.

Symptoms:
After installing ASPluris, the scanner may show an error message saying:

When running the following URL http://localhost:5172/ in the browser on the PC where ASPluris is installed, the following error may be displayed:

Solution:
Go to the “Turn Windows features on off” in the programs and features section of the Windows Control Panel. 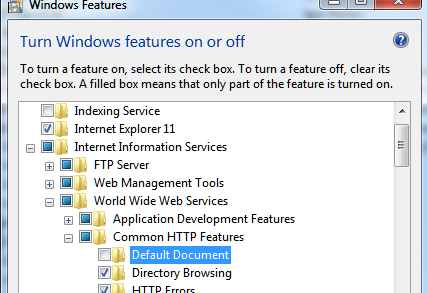 Go back to the “Turn Windows features on off” in Programs and Features and tick the following items:

on Windows 7.
Click the OK button, and once completed, open IIS and navigate to ASPluris V2.3, then click on the restart button.

How many days back does ASPluris look for uncompleted orders?

How can I fully reset my barcode terminal?

You will not normally need to perform a full reset on your barcode terminal. You should contact ASP before doing so.

Resetting the terminal will definitely cause any un-submitted data to be lost, and it cannot be recovered. However, data already submitted to ASPluris will not be lost, and programs and settings that are stored in the Flash ROM should be unaffected.

When I edit the ASPluris configuration file with NotePad (or another text editor), my changes do not take effect, or I get an error message when I save my changes.

Because the ASPluris Service is a system program, the ASPluris configuration file cannot be changed unless your text editor is running in Administrator mode.

The easiest way to do this is to right-click on your editor’s icon and select Run As Administrator from the menu that pops up, then open the ASPluris configuration file and make your changes.

Unfortunately, some text editors do not detect this problem, and simply don’t save your changes instead of displaying an error message.

Why is ASPluris asking for key to be entered if I have already registered it?

If any hardware or network changes have been made on your PC/server, the program may detect this and create a different Hardware Finger Print, which will require a new (re-activation) key to be entered.

ASPluris is not compatible with Windows XP or earlier, or Server 2003 or earlier.

What is a CAL? How many CALs do I require?

A CAL is a Client Access Licence. You need one CAL for every barcode terminal that you will use at the same time.

So, if the server has five licences (CALs), and five terminals have logged in, a sixth terminal will be refused. However, it is possible to “release” an existing licence, and the sixth terminal could then log on. The “released” terminal would then be refused.

Does ASPluris need to be installed on the same server that Ostendo is running on?

If you install ASPluris on a different server, that server must have a TCP/IP connection to the server running the Ostendo database.